New Chairman announced for the Australian Made Campaign

The Board of Australian Made Campaign Ltd (AMCL)—the organisation that administers and promotes the famous Australian Made logo—has appointed a new Chairman in Allyn Beard, Director of Sydney-based mattress manufacturer A.H. Beard. Mr Beard succeeds outgoing Chairman, Glenn Cooper AM, Chairman of Coopers Brewery, who retired from the Board after 13 years as a Director.

Mr Beard, along with his brother, heads the family-owned A.H. Beard business with manufacturing facilities in every state of Australia. The company employs over 400 dedicated and highly skilled people to produce up to 10,000 mattresses every week –  sold in Australia and around the world.

“As an Australian manufacturer, it is a great honour to take on the role of Chairman of AMCL. I am passionate about creating jobs and keeping jobs in Australia, and a healthy manufacturing environment is essential to doing that. I look forward to supporting Australia’s manufacturers and growers and further strengthening the iconic green and gold kangaroo brand,” said Mr Beard.

“The Australian Made logo really is a valuable asset for Australia’s makers and producers seeking to make the Australian connection both domestically and overseas. It’s never been more important to buy Australian Made than right now. It is crucial we continue to support our Aussie makers and help consumers identify genuine Aussie products to aid Australia’s economic recovery.”

The Board also appointed AMCL Director, Nicki Anderson, to the position of Deputy Chair. Ms Anderson has held key leadership positions at numerous Australian manufacturing businesses within the food and beverage sector and is a Director of a number of ASX, private family and not-for-profit companies.

“With strong links to Australia’s e-commerce, manufacturing and agricultural sectors, I have a deep appreciation of how the Australian Made brand plays an important role for so many businesses selling their genuine Aussie products here and in export markets,” said Ms Anderson. “I am excited to be able to continue contributing to the success of Australia’s manufacturers as Deputy Chair and look forward to growing the reach and effectiveness of this famous kangaroo brand.”

Paul Jensen, Chairman of the Watarrka Foundation, was elected as Treasurer, replacing former Bank of Queensland Chairman Neil Summerson AM who retired from the AMCL Board after 18 years of service. Jim Sturgess, CEO, Crimsafe Security Systems, also joined the Board as a Director.

The full AMCL Board of Directors now consists of:

The Australian Made Campaign is directed by a national board comprising directors elected by the Australian business community from the Australian Chamber of Commerce and Industry (ACCI), its network of State and Territory Chambers, and the National Farmers’ Federation.

This is an exciting time for the Australian Made logo, as a renewed focus on buying Australian and supporting local manufacturers has consumers and businesses exercising their preference for Aussie products more than ever. This renewed pro-Australian sentiment presents an opportunity for Aussie manufacturers to expand their markets with more than 3600 businesses currently licensed to use the logo on thousands of products sold here and around the world.

Australian Made Chief Executive, Ben Lazzaro, said that the strategic direction provided by its Board of Directors had been instrumental to the logo’s success. “AMCL is privileged to have such a strong board of talented individuals with diverse business backgrounds,” said Mr Lazzaro. “AMCL’s Directors don’t get paid a cent for their work – they do it because they are passionate about promoting Australian Made.”

Mr Lazzaro also issued a special thanks to AMCL’s outgoing Chairman and Treasurer, Glenn Cooper and Neil Summerson for their contributions during their time served as directors.

“The Australian Made Campaign is particularly grateful to Glenn Cooper and Neil Summerson who have both volunteered their time as Directors for more than a decade, driving the establishment of critical policies and providing invaluable insights over the years,” said Mr Lazzaro.

New Chairman announced for the Australian Made Campaign 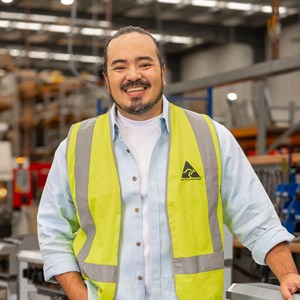