The Australian Made Foundation Cup kicked off today at Royal South Yarra Lawn Tennis Club, showcasing the next generation of Australian tennis stars.

Over the next week, children from as far as Albany, Alice Springs, Burnie and Mildura will represent their states in the only interstate tournament that gives young children from rural and regional Australia the opportunity to compete nationally.

The Australian Made Summer of Tennis campaign celebrates home-grown athletes and local industry, highlighting the importance of supporting both to ensure a better future for all Australians.

“The Australian Made Foundation Cup reminds us all about the importance of nurturing local talent – whether that be the next generation of athletes, farmers or manufacturers,” Australian Made Campaign Chief Executive, Ian Harrison, said.

“We are proud to support rural and regional Australia through this tournament.”

Some of Australia's greatest tennis players, such as Rod Laver, Margaret Court and Pat Rafter originated from country areas.

The Australian Made Foundation Cup will be held at the Royal South Yarra Lawn Tennis Club in Victoria from 11- 15 January 2016, with the winners presented their awards on-court at the Kooyong Classic. 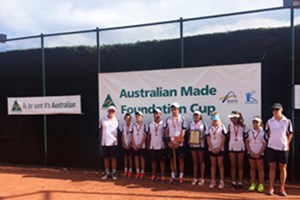