The Queensland boys and Victorian girls teams have won the national Australian Made Foundation Cup after a series of playoffs that took place at the Royal South Yarra Lawn Tennis Club in Victoria this week.

The awards were presented at the Kooyong Classic today by Australian Made Campaign Chief Executive Ian Harrison and tennis great Judy Dalton.

The best and fairest awards went to Queensland, with Bryce Robinson receiving the John Fitzgerald medal and NSW with Krystal Clarke receiving the Judy Dalton medal.

Bryce and Krystal also received a $1000 cheque, presented by the Australian Made Campaign and the Fed Cup Foundation, to assist with their tennis development.

Aussie tennis champion and Fed Cup Captain, Alicia Molik, is the face of the campaign.

“We produce some of the best quality products in the world, and our home-grown athletes are no exception.” 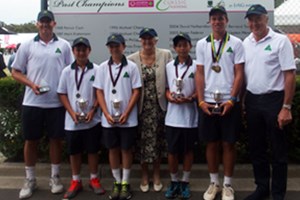